>"I really wish there was magic in the world. I would do anything for there to be magic that could make her, make everything all right again."
> -Nurse-Kun 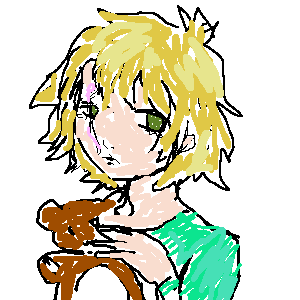 Damaged Goods is a classic from 4chan's (supposedly) "Golden Age" (2006-2007) where a registered male nurse (dubbed "Nurse-kun") asked /b/ for advice when his boring everyday life in a nursing home was interrupted by the arrival of a badly hurt 7-year-old girl.

At first he merely thought this an interesting anecdote, flavoring it to get the attention of the "fucked-up" /b/tards known as Anonymous, but in an uncharacteristic change of heart, some anons pressed him to actually help the little girl out.

As the events unfold, the magic of the story somehow enchanted the cold heart of Anonymous. The people famous for mercilessly crushing 12-year old girls convinced Nurse-kun to grant the broken soul one friend in the world, and to save her from an unfortunate end. One thing led to another, and for once, the legions of Anonymous found themselves giving the little girl something to smile about.

It does more than just tell a riveting tale about one guy and a girl; it gives a window into what 4chan was, what this influential community became, and what the site truly meant to the users who lurked and posted at the time.

With the discovery of a complete archive, we can fill in the blanks as to exactly who and what Nurse-kun was replying to, creating a **Remastered Edition** that brings a new angle of the story. *These had previously been omitted, due to Wikichan's mad rush to winnow out the story from the trolling.*

There are 23 chapters/threads in this story. Nurse-kun's first post on 4chan's /b/ appeared on the 17th of December, 2006, and had been updated regularly thereafter until June 2nd of 2007, when the posting stopped abruptly.

A (non)Danish anon known as Sarafan followed the threads in real time as the story unfolded, and worked tirelessly to save the story for future generations.

The threads were documented in real time on Wikichan, where it was dubbed "Damaged Goods". However after a server crash, all of the fanart was lost and the story was almost lost forever. Thankfully, Shii managed to save the entirety of the wikipages beforehand, until his website was itself shut down.

The original threads were uploaded to temporary download sites where they were soon lost, but Sarafan had a long-lost archive with everything in it up his sleeve. The Bibliotheca Anonoma discovered Sarafan's complete 4chan thread archive, out of serendipity, 2 days before Megaupload's infamous takedown.

And from there, we have created the Remastered Edition, restoring the story to it's original glory.

His /b/ threads have become 4chan legend, and his legacy is heavily debated to this day. The two or three hundred replies his posts receive in each thread fall into roughly one of seven categories:

On December 14, 2007, Shii received an anonymous tip from a professional statistician who was convinced Nurse-kun's story was fake. In the United States, car accidents are tabulated in a national database called the Fatality Analysis Reporting System: http://www-fars.nhtsa.dot.gov/Main/index.aspx (FARS). You can go to the FARS database yourself and query their results for 2006 and 2005. Very few children were extracted from cars. The guy claimed he couldn't find anyone matching Nurse-kun's description at all. Use the database yourself and see if you can determine Nurse-kun's home state.

> Comment by C. Reed: (regarding case 54-188: the mother did not die) "Man and toddler die in crash; 5-year old child injured" ... Anyway, if the story was true, there would be news reports about it somewhere given that local news will report on every fatal car wreck.

And indeed, it was:

Comment by J. Stone: *I believe I have found out the location of nurse-kun and ampu-tan I am 90% sure that they are located somewhere around Washington DC.*

>For the first outing in chapter 16 they went to the Kennedy Center for Performing arts (Which in 1992 was renovated to be more handicapped accessible) The Smithsonian National Air and Space Museum I am not that sure about the library though.
>Next in chapter 19 for the hockey game they went to the Version center which hosts the Washington Capitols.
>And finally in chapter 21 when they went on their walk it was at the Tidal Basin and or West Potomac Park which as Nurse-kun stated is usually packed with people watching the cherry blossoms bloom.

Fanart and other stuff

All pictures have now been discovered in their original resolution from Sarafan's archive. They can be found in the addendum threads in the Chapters page.

These are direct html files of the original threads as they looked like on 4chan, as posted to Wikichan. All of these would have been lost due to Rapidshare's deletion policy, if not for a previously undiscovered upload that Sarafan made. We used these to add Anonymous's replies to Nurse-kun threads, as the ones on Wikichan and Shii's site only contained the story.

This is the recommended version; It contains everything sarafan's archive does, but organized for clarity. - Completed Archive

This is the original archive from sarafan that helped us so much. It's a bit messy though, so use the one above. - Sarafan's Archive