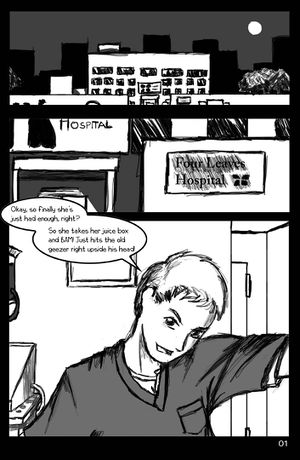 A young registered nurse, he sees life in it's worst everyday. As a professional he deals with it as it comes along, but that was before he saw her. Now with a yearning to help beyond the call of duty, he continues to provide support for a fragile life.

Obviously, he was an active user of 4chan, but not a lot is known about him since he keeps his anonymity for security and safety purposes. He does tell us that he's in his twenties and is a male registered nurse who works at a nursing home during the late shift.

>I have no future. Nobody wants me anymore.
> - Amputee-chan

Amputee-chan is the adopted child of the anon known as Nurse-kun. According to his story she is half-Norwegian, half-Japanese, blond, green eyed, and missing both legs above the knees due to a car crash. She is also missing her right arm below the elbow. With her immediate family dead, and her relatives leaving her for dead, she has been abandoned in a nursing home as a ward of the state.

She enjoys gaming, teddy bears, and beating up racist shitheads. Turn offs include nightmares about her dead parents, losing at DDR, and professional behavior on the part of medical professionals.

Something was different today. For once, the /b/tards who called themselves Anonymous did not display their typical face.

While they ramble in some "colorful" discussions (In the thread right before they were dumping CP), Nurse-kun's story led Anonymous to respond with a mix array of emotive replies, sharing Nurse-kun's desire to heal. Anonymous even drew some nice pictures for Amputee-chan in an effort to make the girl happy, and for once in her life she actually laughed.

An recurring character who claims to be Amputan from the year 2026, to hilarious effect. Desu Girl foreshadows Nurse-kun's change in attitude from helpless observer to benevolent father figure. Her posts were not archived on Wikichan and were only recently discovered with the original thread archives.

A sysop of Wikichan who tirelessly archived each thread of Nurse-kun's story. Before the 4chanarchive was created, people like Sarafan were the only ones keeping records of 4chan's greatest stories and achievements.

> I wrote the suck-ass anonymous message board software that they (4chan) still use today, despite never having taken a programming class ever.
> - Shii

A very significant person, engineer, and admin in Something Awful's ADTRW, world2ch, and early 4chan. He claims to have gotten 4chan's 10MGET, (hazukiget), and was a major proponent in the use of anonymous BBS systems. He sometimes posted anonymously to Nurse-kun's threads, and drew one of the fan art.

Due to the incompetence of Wikichan's admins, it's content was habitually lost every year and spammed into oblivion in the middle. Right before Wikichan went down for good, Shii saved this story to his own site. Without this guy, the story of Nurse-kun would have been damned to oblivion.