Hey, /b/. I know this is considerably sooner than I've found tends to work well, but I did say yesterday that I'd check in today, to see if anyone had anymore valentine ideas for a certain limbs/eye-reduced little girl. If so, I can print them out and bring them in for her to see, if not to leave them laying around afterward. Non-appropriate contributions aren't unwelcome, though they'd likely remain within the thread for the amusement of ourselves, rather than her perusal. Hit me with your best shop, /b/ and whoever else read the wiki or whatnot!

On a non-valentine related note, not much happened last night, save for my burning some filet mignon so badly that Mama told me I suck and she laughed herself, quite nearly, sick.

I already went out and picked up some candy and some pink origami paper (as she was running low), so suggestions of that sort aren't really needed, at the moment.

Well, if I do bring anything in for her to see, it'd be because it's funny and lighthearted, not romantically inclined. Something to cheer her up in general, because she can rarely afford to pass up such a thing at any given time.

I don't think baseball's really her thing, what with the lack of depth perception, and all. I'd post a picture of her trying to catch a ball and getting hit in the face, but I don't have the MS Paint talent.

The interbutt is forever, you are not anonymous, a picture is considerably easier to spread around to places it shouldn't be than a text post on /b/, I'm not comfortable with exposing her THAT much, etc.

I'm happy to have provided a new hobby to people so desperately lacking in things to do.

...I was speaking hypothetically. I haven't actually had an opportunity to play catch with her yet, and probably wouldn't, since she'd just wind up embarassed, most likely. Particularly since there was an incident with one of my colleagues, though, who tossed her something, playfully, once, not thinking, and when she missed catching it by a foot or so, kind of surprised it'd been tossed at her in the first place, she dropped into a depressive state for the rest of the day, refusing to speak to anyone about anything. Until I came in later, and she complained to me, bitterly, about how the nurse in question was 'making fun of her', and almost started crying as she talked about it.

Catch isn't on the agenda, no. Besides, she isn't some emo hacker fag; if she's going to be anybody, it's Motoko.

Heh, well, who can find Waha objectionable...? But should it be one big page-sized Waha, or a ton of tiled mini-Wahas? 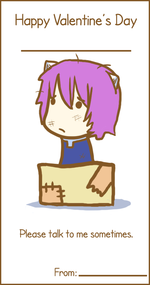 Somehow, I'm not sure Nana-themed cards would be the most warmly recieved by her. Call it a hunch. The fact that they exist, though, is certainly par for the course for Mr. Kim.

I got her a special valentine package with chocolate, gummies, skittles, and some licorice. Should be at least one thing she likes in there, depending on her mood!

Um, maybe another time. It sounds like a great way to celebrate this day of love, but there's the whole lacking digital camera thing and suchlike.