Only 30 minutes in MSpaint for this masterpiece

If there's fanart, then she's a "-chan". And she needs more fanart.

Eh. Not worth criticizing.

On a non-text related note, fanart of her, based on my description is welcome. I can give further details if necessary.

Fanart of me would be pretty retarded, unless someone wants to draw an Anonymous in scrubs or something.

Fuck I just realised the OP's pic is almost exactly like the girl he's describing; I don't habeeb, must be fanfic.

Ever consider that he posted that picture because of that?

The picture was found on the internets when I was looking for something not-real but similar.

I'm not a guro fan, so it wasn't much fun finding it.

OP, keep starting the thread with that amputee loli. If some faggots get their panties in a twist over that and the very first post that you made, I say fuck them.

I chose the OP picture because it was eyecatching, and, well, pretty close to her situation, disturbingly enough (she doesn't have such extensive scarring on her leg-stumps, and her right arm's is a much 'longer' trans-tibial amputation, rather than a disarticulation). I'm not sure if I should change it, since it's a reasonably good way to suggest that it's a genuine thread about her, though I guess that's easily enough faked. I'll think about it.

I hadn't thought it was very indicative of raep, what with the lack of cocks, or mysterious white fluids, or any sort of a 'come-hither' look or position on the picture-character's part. I'd considered censoring the naughty bits, but this is /b/, and, like I said above, it's eyecatching.

OP, how about starting to post threads with a pic that is less...indicative of loli raep?

The disfigured loli is somewhat unsettling, and distracting from your message. 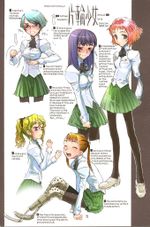 [On an unrelated note, people kept spamming the picture that inspired Katawa Shoujo]

This thread reminds me of this.

WHO WOULD YOU CHOOSE /B/?

Uh, I'm not sure exactly what to say, but I suppose I can at least give you a fair description of her.

She's seven years old, scandanavian father, japanese mother. I'm not a geneticist, so I don't know the odds, but she wound up with blonde hair, somewhere between ash and honey, I'd say, and green eyes. She also wound up with a skintone somewhere between his (I'm guessing) pale fjordish and her (also guessing) pale japanese. Her features are predominantly still japanese in configuration, with minor caucasian/fjordish bits here and there: She tends toward the EXTREMELY cute variety of japnese-ish girl features, however, petite and 'idol' worthy. She's beautiful, by any standard.

She was a physically active girl before the accident, involved in both general athletics and gymnastics, it seems...probably the main reason she's doing so well with her rehab. She's rather petite, average-little-japanese-girl sized, but not tiny. No particularly special innate physical characteristics from the neck down.

[Continuation from the thread in /i/ described above] Her right arm was amputated trans-tibially (through the upper arm), about four inches below the shoulder. Both her legs are trans-femur amputations (through the thigh), roughly halfway down. She doesn't have Bikko-style hypertrophic scarring at any of these locations, though the injuries only occured roughly three months ago, so they're still quite new, and still healing completely.

She's learning to walk again with a pair of prosthetic legs; these include artificial knees (hydraulic models, I think), and she uses silicone sheathes that then hold the sockets in place via suction. Her prosthetic right arm is a mixture of cosmetic and functional, with a myolectric hand and bodypowered elbow; it's also held in place via suction between the socket and the stump. Her right eye was lost, and has since been fitted with a prosthetic orb and a cosmetic 'glass eye' that looks quite a bit like her real one, though you can tell up close. There was some scarring over her eyelids and above and below the socket, since the eye was lost via a chunk of shrapnel in the accident, and it tore up the surroundings somewhat, too. Not as large as the first picture in the thread, but noticible.

She wears relatively simple sets of clothing...gowns, housecoats, etc. Shit, almost forgot: Her hair is somewhat short all-round, the original picture in this thread is actually not that far off...she hasn't been wearing it up in ribbons or barrettes or such much, since she doesn't like people helping her with it, and she can only do so much by herself. Not entirely sure what I think about all this, but if people feel the need, who am I to object?

Frankly, all my information about her parents is secondhand gossip from the hospital, and a bit from her records. It hardly included a family tree, or even pictures of what her parents actually looked like.

OP here. I honestly have no problem with a clothed version. If I had the photoshopping skills, I would've done it myself. Anonymous isn't my personal army, though, if someone feels like doing so, it's good, if not, I can manage some black censor bars or something.

(To the edit below): Well, that would be the final distinguishing touch, all right. The hair is actually pretty damn close...good work there.

>PROTIP: the tibia is a bone in the lower leg. The right word for an amputation through the upper arm is transhumeral. I doubt the OP is a genuine registered nurse, he'd know at least this much.

Fuck, this is why you don't drink and post, as lame and undoubtedly made-up as that sounds.

Guess it's a good thing I didn't go for med school after all. Anyway, need to head in to the 'office' in time for the nurses' lunchtime gathering, to bounce my idea off them before I take it to the administration office.