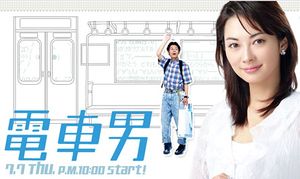 This story, along with the corresponding TV drama is one of the Culturally Important Treasures from the Internet.

"Densha Otoko, or 'Train Man is the name of a very popular book published in Japan in early 2005, which tells the true story of a nerdy guy who falls in love with a girl who he saved from a drunk on a train. This entire story takes place on a Japanese bulletin board system called 2channel, or 'ni-channel', particularly in a thread called 'Men Being Shot from Behind', where single men get together and gripe about being single.

In typical Japanese fashion, after the tremendous success of the book, both a movie version and a TV drama series were released. 'Densha Otoko' is really the "it" book of 2005 for Japan. It's a really great story and I hope that this translation helps you enjoy it, too."

For the sake of archival purposes, Densha Otoko has been mirrored here. The recommended version is Lindsay's version located above.

The Densha Otoko TV Drama takes the story from the book and visually fills in the blanks. It gives viewers a boatload of awesome jokes and the signature drama tearjerker. The drama also provides a rare insight into the difficulties in life that cause Japanese people to end up on the internet all day. Few other media has depicted so well the surprisingly familial bond and support that users feel, even as they talk on an anonymous BBS.

A great writer has made an awesome critical analysis into the story, how people reacted, and how it affected Japan.

Misaki Ito, the actress who played the role of Hermes in the TV Drama, has made an interview which was translated Densha Otoko Q and A.