8chan (dead URL) was an imageboard created in 2013 that allowed users to create their own boards. Originally founded by copypaste, the site was taken over by Jim Watkins, operator of 2channel, after copypaste left, then was closed in 2019 following a spate of mass shootings attributed to users of the site. Several post-8chan imageboards exist.

The formatting guide is as illustrated by the below meme that circulated on 8chan: 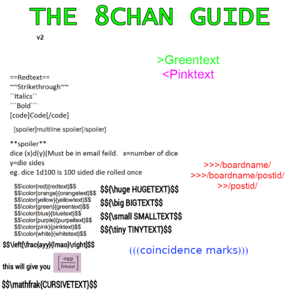