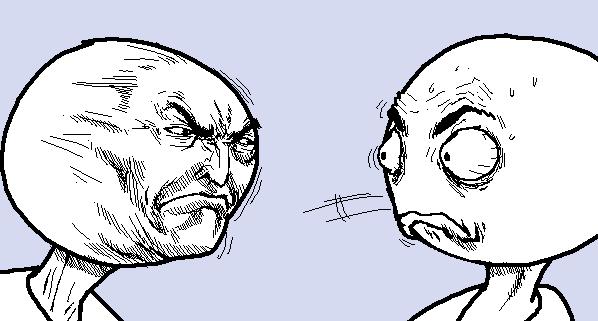 Three Angled Blue is 4chan's most influential, most beloved artist. He's got a distinctive style: expressive faces, fine engraved details, a masterful shading style. Somehow he manages to make masterpieces... with nothing more than MS Paint.

Despite what you may believe, once upon a time, there was an age when rage comics were good. They were detailed prints that distilled powerful action scenes and striking faces twisted in anger, reminiscent of Jojo's Bizarre Adventure.

They satirized the inane discussions by trolls who troll the trolls.

And they contained parables that warned anons of the dangers of ironic shitposting. 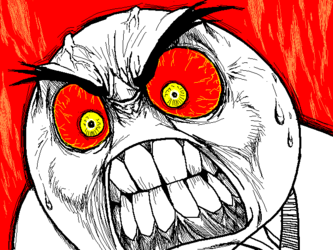 The rage faces of today are a pale mockery of his legacy.

Today, very few people, even anons struggle to recall his name. But all will recognize his creations from a mile away.

And thus, we built this art collection, with the purpose of archiving as much of their works as we can find; such that their legacy shall not perish from the earth.

Most of Three-Angled-Blue's works were posted anonymously on 4chan during 2008, and are at threat of being lost forever as link rot sets in. The loss of the Chanarchive is a bitter blow against the record of his work.

If you can find a work, upload it and place a link here. Chances are, they're about to disappear forever as hard drives crash and websites shut down.

Some anons have created some amazing voiceovers for his comics. 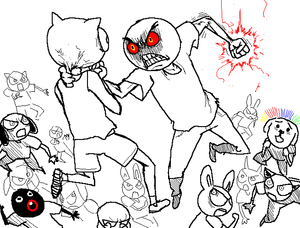 EPIC FRUSTRATION + Rage vs. Cancer is the Bayeux Tapestry of the tumultuous events of 2008’s Positron Uprising. Floods of anons from /b/ escaped from yet another one of Moot’s garish CSS hacks, raiding other 4chan boards in the process: such as /trv/, and most of all, /v/.

Check out the comic series, and the equally impressive flash adaptation in the links below.

{{#evu:https://www.youtube.com/watch?v=NSnAdcyxCZ4&feature=youtu.be |dimensions=360 |alignment=right }}9 years after releasing the original animatic, NCH (who made the original flash) released a new updated version of the animatic. Now fully animated and updated to reflect the modern state of /v/, while still capturing the original 3 Angled Blue charm.

Three Angled Blue is now MIA, long gone now and probably never to return. But there are those who evoke his legacy.

Artists who continue the legacy of his detailed engravings.

Project Hate Machine is a fighting game collaboratively produced by anons that pits 4chan boards against each other (inspired by EPIC FRUSTRATION).