See previous report for information on what happened to Server 2 on 2017-11-22, and other contextual information about how the archivers are hosted. 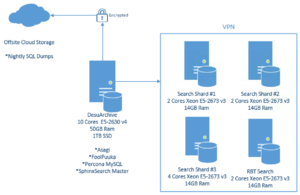 Desuarchive and RebeccaBlackTech/Rbt.asia now serve text and thumbs again with upgraded Sphinx search servers, allowing /int/ search and allowing Archive.moe text dumps from October 2015 to be imported. Archived.moe has also returned to full service but will have a short maintenance downtime in a few weeks to relocate to a new server, which we are putting together.

To restore the full image server (cdn2.desuarchive.org), the Bibliotheca Anonoma has purchased and successfully tested a new $300 ASRock EP2C602-4L/D16 motherboard to replace the Foxconn T2491601 motherboard that failed on Server 2. Since it is a Xeon E5-2600 LGA2011 and DDR3 compatible motherboard, the majority of our parts and hard drives were compatible and the configuration was tested to work. Depending on how fast the parts arrive, deployment could occur on 2017-12-16.

At this time, we can bear the cost of those parts ourselves, but we don't have much more funds for future upgrades or hard drive replacements. To date we've collectively put in hundreds of hours of volunteer work and around $5000 into this equipment, not including monthly fees of $250-300 a month, and overcome many obstacles that would have vanquished our predecessors.

Notice that once Server 3 is deployed, there's enough room and resources to comfortably fit more expansions, such as providing more RAM for another sharded search server (even more RAM hungry than the Asagi scraper), the ability to archive many future boards of 4chan, or providing hard drives to import all full images from Archive.moe (dumps from Oct. 2015, no relation to Archived.moe) and other dumps.

Thus, if you would like to donate specifically to help with future upgrades or unexpected costs, drop in some funds to the following addresses:

Regardless of funding, the Bibliotheca Anonoma is also pursuing software improvements to Asagi or even an asynchronous replacement (work which benefits all Asagi-based 4chan archivers). Already, we have optimized our MySQL tables with TokuDB, and put together a sharded Sphinxsearch cluster that enables /int/ search and allowed us to import Archive.moe /a/ data from before October 2015.

Want to start your own 4chan archiver?

It costs everyone about $240 a month to host all these services, all paid out of pocket by Desuarchive and Archived.moe ($50 a month for them). (After the failure of Server 2, we deployed cloud services to host text and thumbs of Desuarchive and RebeccaBlackTech, making it about $300 a month for December.)

In total we have collectively put more than $5000 into the hardware: $1500 for our current 5x5TB 20TB ZFS and another $1500 for (our originally planned upgrade) an empty 5x5TB 20TB ZFS. We don't have much funding left for anything more.

This new combined server will be referred to as Server 3, and will be colocated at Colocation B which formerly hosted Server 2. Server 3 could be deployed on 2017-12-09 or 2017-12-16 (depending on when parts deliver), and once Server 3 is deployed all the full images are restored.

To construct Server 3 and restore full images, these are the parts we already purchased and tested to work.

'We need to have a more reliable power supply before we can deploy Server 3 and restore full images. These are the upgrade options we can take.

The Dilemma of Archival

The key systemic issue with 4chan archival for each of our predecessors has been the ever increasing resource demands of the FoolFuuka/Asagi scraper. Not to mention that 4chan itself is gradually growing in traffic, if not as quickly as in years past.

As a result, a popular 4chan archiver will quickly outgrow or overtax its hardware, and unless they make upgrades and gather donations to do so, they will collapse.

Historically, 4chan archivers have thus been faced with three stark choices, each of which we have overcome and will continue to do so in the future:

Desuarchive began from humble roots two years ago as a private FoolFuuka archiver, but then took upon the responsibility of archiving most boards from Archive.moe (no relation to Archived.moe) in October 2015. Since then, as bandwidth needs have grown, Desuarchive has grown from a small Comcastic home lab to a VPS service to a colocated datacenter, and it also serves RebeccaBlackTech after it outgrew its home rig.

The Bibliotheca Anonoma continues to make planned hardware upgrades as usual, such as a case upgrade to support 12 more bays per server. Unfortunately, after Thanksgiving we have had to make a large unplanned purchase of $600 for motherboards and power supplies after the wholesale failure of the motherboard of Server 2.

We thus can return to service as before, but financial resources are running thin for any hardware upgrades (such as any future hard drive replacements), so donations are gratefully accepted.

In addition, we are also pursuing software improvements to Asagi or even an asynchronous replacement (work which benefits all Asagi-based 4chan archivers) and have already put together a sharded Sphinxsearch cluster to allow /int/ search and the import of Archive.moe /a/ data from before October 2015.

The Bibliotheca Anonoma is researching several initiatives that could significantly reduce the resources and cost needed to run a 4chan archiver, or any website with heavy traffic for that matter.

TokuDB instead of InnoDB for MySQL

TokuDB uses compression that is significantly faster yet smaller than InnoDB, thus allowing us to use a much smaller SSD than we would normally require with InnoDB. We also use Percona server instead of MySQL for its better performance.

The Bibliotheca Anonoma has applied sharding to relieve the strain on Desuarchive's search servers. Before today, we were unable to offer search on /int/ nor could we import the Archive.moe dumps from October 2015, which would consume too many resources. The Sphinx server consumes a tremendous amount of computing power and RAM to conduct its queries, greater than any single one of our nodes can handle.

But by combining the strength of 4 VPS servers each with 2 Xeon E5 CPUs and 14GB of RAM, we have managed to break this barrier.

The official documentation is very sparse on how to do it, but we will put together a guide sometime.

From our cost breakdown, it is clear that the expense of publicly hosting large amounts of full images is tremendous. (currently 20-40TB at $3000 and that's not even including the Archive.moe full images from before October 2015) There also isn't much of a methodology for users to contribute the files they already have on their computer. Most of all, if the centralized servers are unable to handle the bandwidth or run out of financial resources, they shut down and there's not much anyone else can do to bring it back, even if the whole site may be in everyone's browser caches. (We at least post public backups to the Internet Archive, though that was achieved at tremendous effort.)

IPFS (and it's blockchain subset, Filecoin) could possibly be the solution to all this mess since anyone with their meager home connection could operate as a "seed" of the images. We would still need to operate our own big storage seed to prevent rarely accessed images from being lost, but we would be able to do it from our Comcastic home connection. https://ipfs.io/

The problem with IPFS right now is that if most users aren't using IPFS, there is no bandwidth savings and few seeds. So unless you are running the IPFS software on your own computer, we have to host an IPFS Content Delivery Network (CDN)-style gateway to serve users the files (e.g. https://ipfs.io, https://neocities.org : still need central servers to view the decentralized sites, creating a bottleneck). Thus, since we have to operate our own IPFS gateways and storage "seeds", it would operate as a less effective CDN (Content Delivery Network), so it is theoretically no better than Cloudflare upon our existing storage servers.

The solution is IPFS.js, which allows a user's own browser to allow users to connect directly to p2p seeds. But it doesn't yet have DHT support so it has trouble finding IPFS peers without having a torrent-style tracker.

But maybe one day IPFS.js will have DHT support. The best bet is to help them make it possible so the majority of users can rely on it. Track the progress of IPFS.js here: https://github.com/libp2p/js-libp2p-kad-dht/pull/1

Ethereum (a very successful decentralized blockchain computing network) has the Metamask browser addon, this should be possible.

Gladius is a blockchain-based, decentralized Content Distribution Network (CDN). It allows website operators that need to handle more traffic on the fly, from just the Slashdot Effect or an actual DDoS attack, to call upon a large peer-to-peer network of Gladius nodes to serve as their front proxy. The Gladius nodes essentially "mine" by offering their otherwise idle internet connections to handle the increased traffic, and are compensated with Gladius tokens.

It sounds like a pretty darn effective concept, and might be a better way to rent out your idle home internet connection than a riskier blockchain decentralized VPN service. Though ISPs might not like the sound of this regardless, so we are monitoring their progress.

Note that simply because it is a good idea does not mean the token value will go up. But if the token starts out worthless anyway, there's nowhere to go but up!