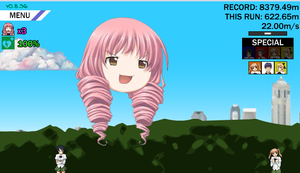 Katawa Crash is a fan game parody of both the visual novel Katawa Shoujo and the fangame NANACA†CRASH!! (which in turn, is based on the eroge CROSS†CHANNEL)

The gameplay is similar to popular flash games such as toss the turtle, wherein the players goal is to keep the character (in this case KS's protagonist Hisao Nakai) from decelerating to 0, losing the game. the game starts by setting the angle and power of launch and ends when the players speed is 0 or upon collision with a certain obstacle.