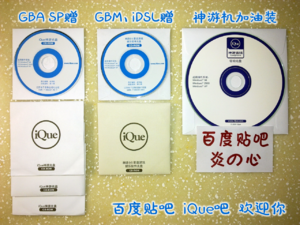 iQue released three CD-ROMs in China, two of which were bundled with a handheld. The discs are, from left to right, the iQue GBA SP CD-ROM, the iQue DS CD-ROM, and lastly the [email protected] CD-ROM.[1]

Information on the CD-ROMs was discovered on Baidu Tieba threads by Castaway2000. 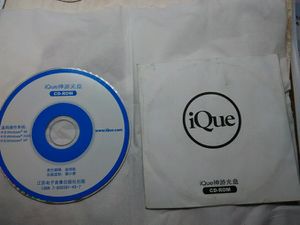 On October 6, 2014, SAYZZA started a new Baidu Tieba thread, where he asked what the iQue CD-ROM was. He found the disc while going through his old stuff.

Two days later, on October 8, H_N_Kirby asked for a copy of the disk, which went unnoticed until about two weeks later, on October 24th. He explained that the disk could be read by a computer, which SAYZZA was initially unaware of. About a month later, on November 22, 2014, SAYZZA uploaded the disc's files to Baidu Pan but did not share the CD as an ISO. As of February 2017, the link is dead.[2]

On March 29, 2017, Castaway2000 managed to get a Baidu account (with the username DKC2intheSky), and messaged H_N_KIRBY (in English), wondering if he still had the CD-ROMs. H_N_KIRBY happened to speak English, and he kindly reuploaded the disc and to Pan Baidu (along with the [email protected] disc). Castaway2000 then mirrored the iQue GBA SP disc to the Internet Archive.

The iQue CD-ROM has a 4MB GBA ROM named "iQue_reader", which doesn't feature the .gba extension at the end, a note from Dr. Wen, two .avi videos advertising iQue Player and iQue GBA titles respectively, and the [email protected] software.[1][3]

The [email protected] CD-ROM was released sometime in 2004 and is essentially an offline mirror of osc.idc.ique.com (except for some files such as the wallpapers). It even includes all of the encrypted iQue Player games on it.[4] 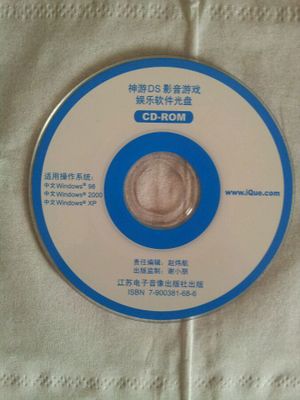 Image of the CD-ROM.

The iQue DS CD-ROM is the third and last CD-ROM created by iQue. Its ISBN is ISBN 7-900381-68-6, which H_N_KIRBY sometimes uses to differentiate between the GBA SP and DS iQue Discs.[2]

The iQue DS CD-ROM is the only disc archived entirely thus far. It can be found on the Internet Archive: http://archive.org/details/iQueDSCD

On March 17, 2014, H_N_Kirby posted a picture and info on his then-newly-acquired iQue DS CD-ROM. He even posted an ISO of the disk on pan.baidu.com.[1]

Compared to the iQue CD-ROM, the iQue DS CD-ROM does not have as many files. The file timestamps range from January 2005 to March 2005; this suggests that the disc was released in early-mid 2005. The files are listed below: