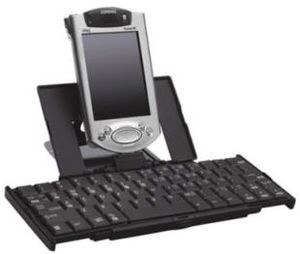 Unfortunately, I only have a Viewsonic V37 Pocket PC (like this guy here), not an iPAQ. Thus, even though it uses the exact same dock connection, it is flipped the other way and has tabs that prevent a solid socket.

Therefore, I had to sand off the tabs and flip the dock connector around.

After I disassembled the connector, I could now plug it into the Pocket PC quite snugly, but it still didn't send any keystrokes. Even after I plugged in a power adapter that kind of fit, it still didn't work out. Maybe the Viewsonic just doesn't support keyboards? Maybe some kind of driver is necessary? (It is Windows, you know...)

Since I don't feel like buying an HP iPAQ, The last resort is to desolder the matrix from the existing controller chip (which only has one data pin output anyway, so NKRO would be better), and plug it in a Teensy with Soarer's controller, which would convert it into a USB or Bluetooth keyboard. Now wouldn't that be neat.

Keyboard output is produced by a certain circuit board under the keyboard matrix. While it could be possible to interface directly with the matrix, I decided that it was more effective if I simply intercepted the scancodes that would normally go to the PDA plug, which uses just three cables and one data output.

We can assume that this keyboard follows the PS/2 Keyboard Standard in some way, since manufacturers tend to be lazy, and it's Windows CE anyway.

If it isn't PS/2 scancodes, we would have to devise a brand new keyboard converter using the Teensy LC.

It seems like there is no clock signal on this specific keyboard, though. This causes some problems for initiating a connection between the two under the PS/2 Protocol. We can only assume that somehow, the system is supposed to take care of that.

The first pin is connected to DATA. Well, what is this mysterious first pin?

On the matrix controller board, there is a single monolithic IC Chip: