These are the official names of the Bibliotheca Anonoma in various scripts:

2016: Great Seal of the Bibliotheca Anonoma 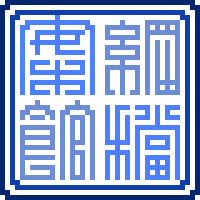 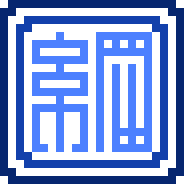 In 2016, we drew up a new Bibliotheca Anonoma logo utilizing Classical Chinese seal script. It comes in three forms: 1x1, 2x2, and 4x4.

The 1x1 logo is a designator with the character 網, representing "network", specifically the Internet.

The 2x2 logo is a simple transliteration of the name into CJK script, 網檔案館.

The 4x4 provides us a canvas for larger declarations, which define our intents for the organization. We composed a short 16 character poem Classical Chinese to carve, which is no small feat for a millenia old language with no accepted pronunciation.

For the BASLQC and BA Compendium logos, we wanted to try something different, and somewhat more challenging. We wanted to use Classical Chinese seal script to draw our logo, but with a twist: we would draw them as pixel art.

The ancient Small Seal script, standardized by the Qin Dynasty around the first millenium, surprisingly lends itself well to pixelization. This is likely an effect of it's vestigial use on Chinese seal stamps, which are carved into stone and thus give preference to thin slices.

A Chinese artist known as Waliwala created a very intriguing specimen that inspired us.

The regular, winding, straight lines of the characters wrap around in mazes that can be approximated using a pixel grid. While circular components exist, they aren't too sharp and can remain coherent as pixellized ovals.

The first challenge was to actually choose the characters to use. As a Chinese speaker, this was not a great difficulty as it would be for most Westerners: where cultural appropriation of the Orient creates some ridiculous tattoos.

However, the name had to match the poetic, multifaceted construction of Classical Chinese (which is as close to modern Mandarin as Latin is to English).

That way, four characters can pack quite a lot of meaning, as shown from these book titles and their long, ridiculously unwieldy English translations:

The first logo of this type was written and designed by Amersel (a core member of the Bibliotheca Anonoma) while he was working on the BA Compendium.

The best description of the BA Compendium is a digital bookshelf for top stories from the Bibliotheca Anonoma. As Classical Chinese predates these two concepts, the characters were chosen from approximate modern Taiwanese Mandarin terminology.

The design of this logo was our first serious attempt at this style, after shelving the project months ago. We met various roadblocks that had to be overcome with ingenuity and methodology, which we developed as we went along.

The layout of the seal would be arranged in a standard 4x4 grid. Borders between characters would be delineated as a cross, two pixels thick, to reduce visual mashup of adjacent characters. However, allowances were made for components like the pointed tip of 書. Finally, a casing of two nested squares with dented corners was used to neatly fit the seal together.

The first major challenge was to force the complex characters into coherent pixellized forms.

A critical design motif of squared seal script is it's compact complexity, where each line is usually one unit away from one another, and the character takes up as much empty space as possible.

Initially, all characters were drawn at once on a predetermined grid size of 42x42, which posed a problem when the 書 character could not be drawn in an aesthetically acceptable manner, due to the small space given. Resizing the entire seal would require the complete redesign of the other three characters, that already worked well with the current size.

This problem was overcome by first designing each character separately, compressing them as small as possible, and identifying expandable sections. Serifs and spirals were added to ends where aesthetically possible to fill empty space in the square.

Then, the character that needed the largest pixel square was chosen as the template size for the 4x4 grid. 書 used up 10x10 pixels, and all other characters were expanded to fit that standard.

(give an example of expandable sections)

After finishing the seal and adding some stylistic changes (such as cutting corners, adding serifs), we colored it in the four standard Bibliotheca Anonoma blue colors found in our Traditional Square Kufic logo.

The two bright colors were applied in a checkerboard pattern on the four characters. The brightest color of the set was used to highlight two significant glyphs: 擬書 [draft] + [document].

As an added bonus, a compact logo was created by taking one character from the name representative of the entire product: 架 (shelf), and using it as a small seal emblem.

Finally, after the logo was drawn and colored, it had to be scaled up to a viewable size: we chose 400x400 to stay consistent, accomplished by disabling subpixel handling on GIMP's Scale tool. The logo was exported as uncompressed PNG, as JPEG would introduce unsightly artifacts.

A compact logo was also created for the BASLQC.

The logo of the Bibliotheca Anonoma from 2012-2016 utilizes a square Kufic logo, a style chosen for it's resemblance to abstract art and QR codes. It's a design style that is more than a thousand years old, yet somehow feels very modern. It is easy to draw, but difficult to master, and it encodes meaning within it's maze-like square pixels.

Square Kufic is a calligraphic artform designed to encode Arabic words in geometrically-patterned architecture. Square Kufic likely found influence from the Phags-pa Seals of the Mongols, which attempted to emulate Chinese Seal Script square forms. (In fact, it might be interesting to put together a pixel-art Chinese Seal Script logo as well.)

This logo was inspired by the Arabic programming language, "Alb", where the author depicted the beauty of it's code by making square kufic inscriptions of computer algorithms (a term derived from the work of mathematician Al-Khwarizmi).

This design guide is immensely helpful if you feel like making your own square kufic design.

All these logos were first designed on graph paper. Then, it was drawn using the the Kufi Murabba Tool by Bahraini designer Qassim Haider. It really helps to have a Wacom tablet, or just a cell phone touchscreen to draw in the lines.

Square Kufic utilizes Arabic script as a basis for it's calligraphy. Thus, the name of the Bibliotheca Anonoma was first transliterated into Arabic.

In the logo, "Al-Anonoma", in light blue, is centered and wrapped around by "Maktabat", in typical blue. Both are surrounded by a navy blue box.

The empty corner in the top-right could contain a standard square kufic inscription of the plain Arabic name.

The logo takes a lot of liberties with square kufic design rules. In order to fill all empty space, it breaks with Square Kufic Design tradition, lacks symmetry, and contains an excessive amount of vertical lines.

It wasn't long before we created the second version below:

This is the more traditional Square Kufic logo that we used during the early years.

It is diagonally symmetrical; both the top and right sides, and the bottom and left sides spell out "Maktabat Al-Anonoma", and the long, vertically extended lines of "Al Anonoma" lock together with each other.

An alternate logo design suitable for smaller icons can be used.

This design stacks "Maktabat" upside down on top of "Al-Anonoma".